This past weekend was the University of Iowa’s annual Relay for Life event. I believe I have talked about the event in a past post, and if I haven’t then let me just give you the 411:

Relay for Life is an event that is put on all over the United States as a fundraiser for the American Cancer Society and it is also a place to remember those who have been affected by cancer, celebrate the lives that have been affected by cancer, and to fight back against the disease. The University of Iowa student organization, Colleges Against Cancer, puts on the UI’s Relay every year.

Since I am Publicity Chair and the “official” spokesperson for Colleges Against Cancer, I was in charge of getting on contact with media sources as well as the social media pages of our group and event. The nice part about the official University of Iowa Relay for Life event page website was that it had little tricks participants could use to fundraise via e-mailing, iPhone apps, and Facebook. 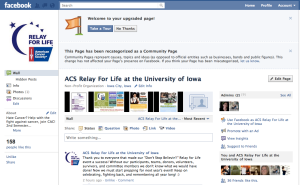 Now, there was a difference from the fundraising with Facebook aspect this year. Last year one could put a button on Facebook that showed your progress with fundraising, your goal, and a direct button to donate. Apparently because of Facebook deciding to constantly “evolve” and change its website layout/content, the button was no longer of “relevance.”

So that left this year’s fundraising with Facebook “tricks” to a minimum: put the Relay for Life logo as your profile picture, dedicate your status to Relay, or post a link to your individual participant page.

Personally, this new way of fundraising via Facebook greatly hindered my fundraising through Facebook this year. Last year I received $100 via Facebook donations than this year. Why is this? I think it’s because people click the “personal page” link to donate and then they have to click another button that says “donate” and then go through about 3 more page before they are finished.

A lot of people nowadays like to do things quickly, especially when it comes to the internet. A lot of people, myself included, are so used to fast internet connections that we don’t want to spend the extra two minutes clicking to more pages. We’d rather just click to a direct page.

Now, this year CAC also introduced the idea of having a Twitter account, which I was also in charge of. The nice thing about the Twitter account is that it directly connects to Facebook so if I wanted to update the “status” of the CAC/UI Relay for Life group page, it would automatically update the CAC Twitter account’s page as well!

As the event grew closer I noticed that the Twitter account gained more followers because the group was also posting more specific information about the event that would get people excited about it. It’s also nice to have Facebook connected to Twitter because then if you want to write more than 140 characters you can via Facebook and then there is a link on the tweet leading people to the Facebook group page as well!

But yet, fundraising via social media and the internet seemed to prove more difficult this year than last year. Is it because there is more competition out there? Is it because advertising and asking for donations bas become so frequent on the web that people are becoming indifferent to it? Is the tactic of appealing to emotion starting to no longer have an effect on people?

While Relay for Life is over for this year, that doesn’t mean my job is over. I am hoping to be one step ahead of the game for next in terms of fundraising, publicity, and the usage of social media and the internet in those two components to create an even MORE successful Relay for Life and to help create more birthdays for cancer patients all over the country!

*Any and all suggestions are welcome!*

2 thoughts on “Fundraising with social media and cyberspace”