I have spent many hours in my journalism classes at the UI thinking about the concept of censorship and social interaction in the media.

I’m a millennial and I grew up with the concept of computers and the fear and excitement of interacting with people online. When I think back on my first interactions on AOL Kids I think of chatrooms. Places where I could go and talk with other kids my age who had the same interests…or so I thought. Chatrooms are now a thing of the past and Reddit is where people flock to interject their two cents. Facebook chat, Twitter streams and G-chat have replaced AOL’s Instant Messenger. Oh those were the days…

As I got to my upper level classes, I was advised (many times) to be careful about what I was putting out onto the internet “because you never know when or what a potential employer might find.” It makes complete sense for one to shelter their private life from their public life, especially if they were sheltered as a child with a lack of understanding about the effects of alcohol and drugs. But what confused me about the concept of censorship, was that in those same classes I was being exposed to photographs and videos of people becoming mince meat from an exploding bomb, not really leaving much to decipher that all that red used to be a human standing on that street corner.

I can’t even wrap my head around the concept or role that censorship has in our media nowadays with the evolution of social media, citizen journalists and a decaying social system. I didn’t want to see the footage of Louisville’s Kevin Ware snap through his skin, leaving a broken bone exposed for all to see, yet when I searched Google for an update on his story there it was, popped up on my browser for me to see not only his gruesome injury but my peanut butter sandwich I had eaten earlier.

Can we really expect people to have the same values as what was taught and promoted 20 years ago? I don’t think so. Yes, people want to see the truth, the reality, the rawness of events – so does that mean there is no longer a line that can be drawn and when one is attempted to be drawn, it creates more controversy then respect at the fact that the network chose to shield the public from another graphic image or audio?

So if I can’t expect the media to be censored, how can I expect to censor myself? I have all of these outlets I can use to share my disappointment and frustration with the poor customer service of a store and I can also share my progress in my fitness and health journey, ab shots included.

Is the tactic used by many journalists on Twitter “retweets not equal to endorsements” really that solid? And when will people stop trying to find dirt from a person’s past? Everyone has dirt, I mean even Pope Benedict had dirt from his childhood that was used to try to diminish his authority over the Catholic church. Have we turned into a society that is thankless, that’s always judging because it’s easier to do that now with photographic, video and audio evidence of a politician’s rowdy college days accessible on the internet?

Was censorship so badly misused in the earlier days of its conception that now we are at the other extreme — sanctioning the use of graphic, can-never-be-unseen-or-unheard images and audio clips, across the digital sphere that is accessible by people of all ages, all groups, all beliefs to do what they will with it?

I wonder how my 8-year-old cousin will perceive the country and the world that she lives in and how that will change as she grows older and is constantly exposed to the internet, social situations, and the media. I hope the value of her life is not determined by an electronic device. I hope that she does not becoming insensitive to injustice because she’s seen it so many times on TV or in movies. I hope that she remembers history and books and how things used to be and can be again. I hope she understands that it is okay to use censorship when she feels like the the outcome creates more bad than good.

I hope censorship finds its way back into the 21st century, appropriately and responsibly, someday. 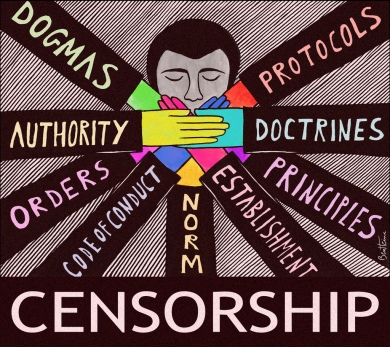 One thought on “Censorship is SO 20th Century”